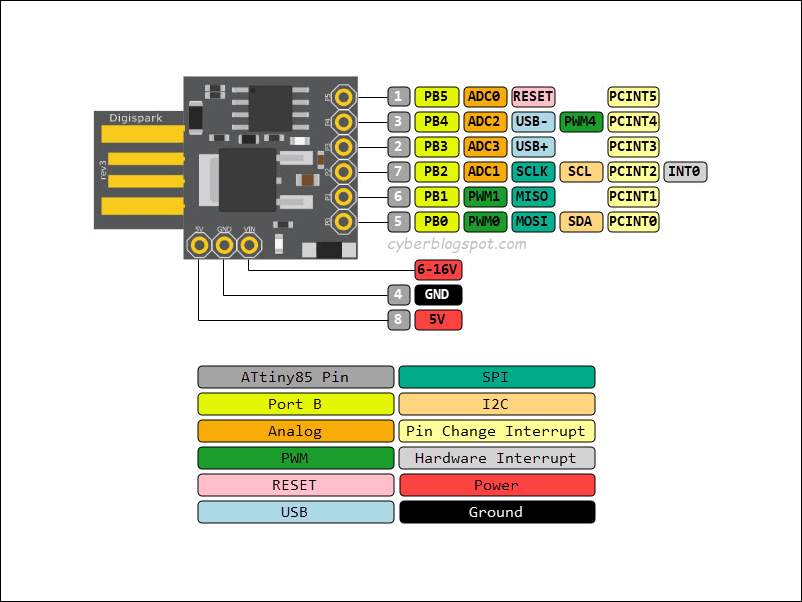 A Digispark ATtiny85 development board is a microcontroller board with an ATtiny85 MCU chip. It is a favorite board for projects that require a small number of GPIOs. The board is basically an ATtiny85 chip that is provided with a voltage regulator and a USB interface. We will take a look at the Digispark ATtiny85 pinout and the different configurations that it has to offer.

Figure 1 shows the two (2) popular versions of the Digispark ATtiny85 development boards. The one on the left uses a type-A USB connector to connect directly to the USB port of a PC or a laptop. On the other hand, the board on the right has a micro-USB connector. As a result, we need a micro-USB cable to connect this to a computer for programming purposes.

It should be observed that both boards have the same pin layout. We can breadboard them as long as we do not connect a header pin to the VIN terminal.

Figure 2 is a picture of another type of Digispark ATtiny85 board. As shown in the picture, the board does not have an ATtiny85 chip but instead only an 8-pin DIP socket. We must provide a DIP-type ATtiny85 chip in order to use this board. Also, the pin layout of this board is different. This board is not breadboard friendly. However, the pin layout is ICSP-programmer ready. That is, the pins are arranged so as to accept the female connector of an AVR ICSP-programmer.

As per specification, the Digispark ATtiny85 board can be configured to use six (6) digital I/O ports. These ports are shown in Figure 3 as yellow pins, labeled PB0 to PB5. NOTE: Port B pin PB5 is by default configured as a RESET pin. In order to use PB5 as an I/O port, an ATtiny85 fuse (RSTDISBL) has to be reset (changed from 1 to 0). Please see How to Reset ATtiny85 Fuses.

Port B ports PB2 to PB5 can be configured as analog inputs. These pins are shown in Figure 3 as orange pins. The pins are labeled ADC0 to ADC3. Be aware that the Port B numbers do not exactly match the ADC port numbers. In other words, PB2 does not correspond ADC2, PB3 does not correspond to ADC3, and so on. Instead,

Referring again to Figure 3, there are three (3) PWM outputs available on Digispark ATtiny85 boards. These are colored green in the pinout shown above and are labeled as PWM0, PWM1, and PWM4. There is no typo error here. The third PWM output is labeled as PWM4 because the PWM port numbers use the same Port B numbers. To clarify,

The PWM output signal is generated by the command analogWrite(). Although we are going to use the ports as analog outputs, we DO NOT use the ADC port numbers. Rather, we use the PWM port numbers which are the same as the Port B numbers. In other words, we are also using the Port B numbers in programming PWM in the Arduino IDE. Please take a look at the following sketch.

Ports PB0, PB1, and PB2 can be used for SPI communication:

Ports PB0 and PB2 can be used for I2C communication:

Ports PB3 and PB4 can be used for USB communication:

Finally, ports PB0 to PB5 can all be used for pin change interrupt and PB2 as external interrupt pin.

Final Notes on Port B Pins

PB5 has limited current sourcing capacity. Also, when it is at output HIGH, it generates 3V instead of 5V on its output.

PB3 and PB4 are both used during programming (sketch upload). Therefore, it may be necessary to temporarily disconnect the circuits connected to them to avoid interfering with the uploading of sketches. Additionally, PB3 has a 1.5K pull-up resistor that is used for USB communication.