An ADS1115 module or breakout board is a 16-bit analog to digital converter (ADC) that we can use with Arduino. Arduino boards come with a built-in ADC. However, this built-in ADC has a somewhat limited capability. The Arduino ADC, with its 10-bit resolution, pales in comparison with the AD1115’s 16-bit resolution .

The heart of an ADS1115 module is an ADS1115 Integrated Circuit (IC). It is a 4-channel analog to digital converter with 16-bit resolution.

The picture above shows the pinout or the pin configuration of the ADS1115 chip. Let’s go thru the functions of the different pins.

Pins 4, 5, 6, and 7 are the four (4) ADC input pins. We can use these pins as either four (4) single-ended inputs or two (2) differential inputs. Pins 9 and 10 are the terminals for the I2C interface, SDA and SCL respectively. Pin 2 is the Alert/Ready pin which serves as a data ready and alert signal. Pin 1 is the ADDR pin that selects the I2C address for the chip. And finally, pin 8 is the supply positive and pin 3 is the GND terminal.

The ADS1115 chip comes in two packages, the 10-pin X2QFN (Quad Flat No-leads) package and the 10-pin VSSOP (Very Thin Shrink Small Outline Package) package. Both of these packages are really very small. The VSSOP package has a body dimension of around 3mm x 3mm while the X2QFN package is even smaller at a body dimension of 1.5mm x 2mm.

The functional diagram above shows that prior to conversion, a multiplexer selects the input signal. Then, the selected signal feeds into a programmable gain amplifier (PGA). The PGA can programmed to provide amplification of small signals prior to conversion. Subsequently, the input is converted by a 16-bit Delta Sigma converter. The converter uses its own built-in voltage reference and built-in oscillator in measuring the input signal. Finally, the result of the conversion goes into the I2C interface. Also, a comparator provides a signal to the external interface that the result is ready for fetching.

The screenshot above shows how to connect the ADS111 ADC chip to a microcontroller. There are two (2) things to note here. First is the pull-up resistors on the I2C and the GPIO pins. Second is the 0.1 uF (100nF) decoupling capacitor on the VDD pin terminal.

When it comes to breadboarding and prototyping, the very small footprints of the ADS1115 chip is a challenge. Since the ADS1115 chips come in very small packages, it is better to use a ready-made ADS1115 module or breakout board. These modules are widely available and are very inexpensive. Some of the available models are shown below.

The schematic diagram shown above is the Adafruit’s version of ADS1115 module or breakout board. It follows the typical connection for the ADS1115 chip which was described previously. That is, 10K ohms pull-up resistors are installed on the I2C and Alert pins. Also, there is a 1uF capacitor installed between the VDD pin and the GND which serves as a decoupling capacitor.

How to Connect ADS1115 Module to Arduino

The wiring diagram above shows how to connect an ADS1115 module to an Arduino Uno board. You might have noticed that the ADS1115 module was drawn upside down. But actually, this is the best way to do it. You put them side by side with the ADS1115 module oriented as shown. As a result, you get to use short wires, possibly reducing noise pickup.

The wiring connection above is just the very basic connection. The ADDR pin is not connected at all. As you may recall, the ADDR pin selects the I2C address of the module. Leaving the ADDR pin of the module unconnected actually means it connected to the GND. Please refer to the ADS1115 module schematic above. This is because the ADDR pin of the chip is being pulled down by a 10K resistor to the ground. As a result, the ADS1115 will use the address 0x48. If you want to change the I2C address, you may use the following table as a guide.

Based on the table above, connecting the ADDR pin to the GND results to an address of 0x48. In order to use the addresses 0x49, 0x4A, or 0x4B, we can connect the ADDR pin to either VDD, SDA, or SCL, respectively. However, using the SCL pin for the 0x4B address needs special software consideration.

If SDA is used as the device address, hold the SDA line low for at least 100 ns after the SCL line goes low to make sure the device decodes the address correctly during I2C communication.

The ALERT/READY pin of the ADS1115 module is also not connected. However, if you intend to use it, you may need to connect it to one of Arduino’s digital I/O pins. The ALERT/READY pin has two uses. First, you can use it for interrupt-driven conversion, where it serves as a data READY signal. And second, you can use it with the programmable output comparator for detecting conversion thresholds. In this case, it serves as an ALERT signal.

To program the ADS1115 module, we need to install an ADS1115 library. There are several libraries available, two (2) of which are available in the Arduino IDE Library Manager. These are the ADS1115_WE library by Wolfgang Ewald and the ADS1X15 library by Rob Tillaart.

How to Install the ADS1115 Library

The ADS1X15 Library by Rob Tillaart

Then, create an ADS1115 object. In creating the object, we need to provide the I2C address which could be 0x48, 0x49, 0x4A, or 0x4B. This depends on the connection of the ADDR pin on the ADS1115 module. See the discussion above.

In the setup() procedure, we initialize the ADS1115.

By running the initialization above, several default configuration options for the ADS1115 chip are set. We will discuss some the most important options one by one. If we want to change them later, the library includes functions for changing them.

In order change the default gain setting, and hence, the FSR, we use the setGain(gain) method. Also, if we want to know the current gain setting, we write getGain();

The ADS1115 has a programmable output data rate. The data rate refers to how many times the input is sampled and converted per second. The table below lists the different data rates, from 8 Samples Per Second (SPS) to 860 SPS.

The ADS1115 can be operated in two (2) different modes. One is the Continuous Mode and the other is the Single-shot Mode. In continuous mode, as the name suggests, the ADC constantly samples the input and produces a conversion. However, in single-shot mode, it makes a one-time conversion and goes into a low power mode. This mode is intended for power saving purposes.

Those are the most important configuration settings. To sum up on the initialization command ADS.begin(), the following are the default configuration.

So far, we have discussed the following lines of code:

For single ended reads, we use the function readADC().

Here is the complete sketch from the library example showing how to use the readADC() function.

In the differential mode, there are four different commands that are available, depending on the channel pairs to be used. 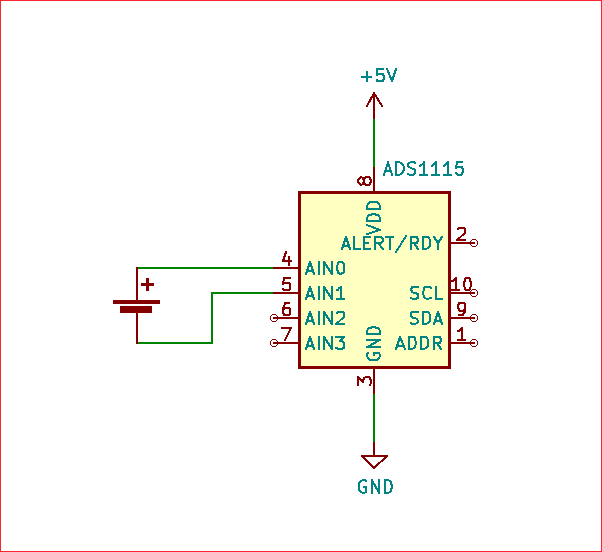 Shown below is the example from the library illustrating how to use readADC_Differential().